"Beer Tamu" is Tanzanian song released on 07 September 2021 in the official channel of the record label - "MariooOfficial". Discover exclusive information about "Beer Tamu". Explore Beer Tamu lyrics, translations, and song facts. Earnings and Net Worth accumulated by sponsorships and other sources according to information found in the internet. How many times the Tanzanian song appeared in music charts compiled by Popnable? "Beer Tamu " is well-known music video that took placements in popular top charts, such as Top 100 Tanzania Music Chart , Top 40 Tanzanian Songs Chart, and more. 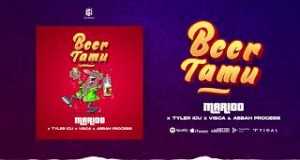 Get it now Beer


​The Official YouTube Channel Of  ;for the Latest Music Videos, Performances, and

The best charting position of the entry is #17 . The song appeared 1 total times in the Top 40 ; The worst ranking place of the video is #34. "Beer Tamu" has been charted in 1 trends (countries):